Royal Navy vessels are monitoring Russian warships as they pass through the Channel, potentially bringing supplies to the bombing campaign against the Syrian city of Aleppo.

Michael Fallon, the defence secretary, promised this week that the Russian fleet would be marked “every inch of the way”. No 10 confirmed that the vessels, including Russia’s only aircraft carrier, the Admiral Kuznetsov, were being shadowed by the navy as they headed towards the eastern Mediterranean via the Dover Strait. The ships were expected to leave the Channel later on Friday.

The flotilla of Russian warships made for an incongruous sight as they made their stately progress along the Kent coast. At about 10am the vessels were clearly visible from St Margaret’s Bay, near Dover, as they steamed past the white cliff

Women loyal to the Houthi movement parade to show support to the movement in Sanaa, Yemen January 17, 2017.

i women held a protest rally in the capital Sanaa against exiled president Mansour Hadi and Saudi Arabia’s ongoing military onslaught to reinstate his rule.
The activists gathered at a football stadium in Sanaa on Wednesday calling on the women of Yemen to “fight for peace.”
The women, mostly dressed in black niqabs and carrying weapons, chanted as they marched to upbeat music.
Missile launchers, machine guns were among the weapons brandished at the event.
Yemen is suffering a humanitarian crisis as the two year conflict continues between a Saudi-led pro-government coalition and the Houthi rebels who forced President Abdrabbuh Mansour Hadi to flee the country in 2015.
People of Yemen are at the brink of famine, with food and aid supplies cut off. UN estimates that at 10,000 casualties, mostly civilian, have occurred since March 2015, when Saudi Arabia began bombing the country to prevent the rebels from taking control of the entire country.
The Kingdom leads the Arab coalition that supports President Hadi, who fled Yemen in February 2015, while the Houthis support former President Ali Abdullah Saleh, who agreed to transfer power to Hadi in 2012, for a two year term. Hadi extended his term in 2014 and was criticized for failing to deliver on his promise to bring change and manage issues facing the country.

UN ‘estimates’ death toll in Yemen war surpassed 10,000
The US and the UK have provided support to the Saudi-led coalition, both in terms of weapons and tactical assistance, despite reports of civilian deaths and war crimes.


“As one of the principal backers of this brutal war, Britain needs to end its arms sales and military support to the Saudis and help put Yemen on the road to peace,” Oxfam GB chief executive, Mark Goldring said in December.
Amnesty International’s director for arms control Oliver Sprague described UK Prime Minister Theresa May and Boris Johnson’s efforts to justify the government supplying Saudi Arabia with arms as “a disgrace.”


All-women protests against Saudi Arabia are common in Yemen. In October 2015, women condemned the UN for failing to address the attacks which killed women and children.
In June 2015, women gathered outside the attorney-general’s office in Sanaa demanding Hadi and his government be prosecuted. “Families of the martyrs of the Saudi aggression demand the trial of the collaborators and traitors," signs carried by the women read.
The UN envoy to Yemen, Ismail Ould Chiekh Ahmed arrived in Yemen on Monday and meet with Hadi in Aden to discuss a proposed roadmap for peace, after Hadi had rejected an earlier proposal that would see a new vice-president step in before new elections were held.
“A peace agreement, including a well articulated security plan and the formation of an inclusive government is the only way to end the war that has fueled the development of terrorism in Yemen and the region. I asked the President to act swiftly and engage constructively with the UN’s proposal for the sake of the country’s future," Chiekh Ahmed said.
beced

Isis militants have posed as Iraqi army troops and killed at least 15 civilians who welcomed them into central Mosul, Iraqi officials have said.
Men, women and children trapped in one of the last Isis-held areas of the city greeted the men driving black cars and wearing police and security forces uniforms, a Joint Operations Command (JOC) and local official in Baghdad told media on Tuesday.
After tricking residents into showing their support, encouraging singing and chanting, the disguised Isis fighters then shot them “to make it clear the area was still under enemy control,” the JOC said.

Hossameddin al-Abbar, a member of Nineveh’s provincial council, told the AFP that at least 15 civilians were arbitrarily ‘executed’ for showing disloyalty to Isis, and many more were arrested.
Isis is clinging on to a tiny fraction of Mosul - once home to 1.5million people - after a gruelling street-by-street US-backed campaign to clear militants from the city which began October last year.
The intense fighting has included Isis tactics such as suicide car bombings and the use of civilians as human shields at strategic locations. Snipers, booby-trapped roads and bridges and an extensive tunnel network have also slowed the operation to drive the jihadis from what was once the largest settlement under their control.


Thousands of Iraqi troops and civilians have died in the battle.  US-led coalition bombing campaigns have also been blamed for civilian deaths.
Isis’ brutal methods of keeping civilian populations under its control such as drownings, shootings and beheadings for minor infractions of its strict interpretation of sharia law reportedly intensified as the struggle for control of Mosul began.
Residents fleeing the brutality have reported incidences where Isis fighters pose as Iraqi security forces in order to trick civilians into showing their support on several other occasions.
While the militants are steadily losing ground across both Syria and Iraq, analysts believe Isis likely to pose a threat in the form of a global insurgency for many years to come. 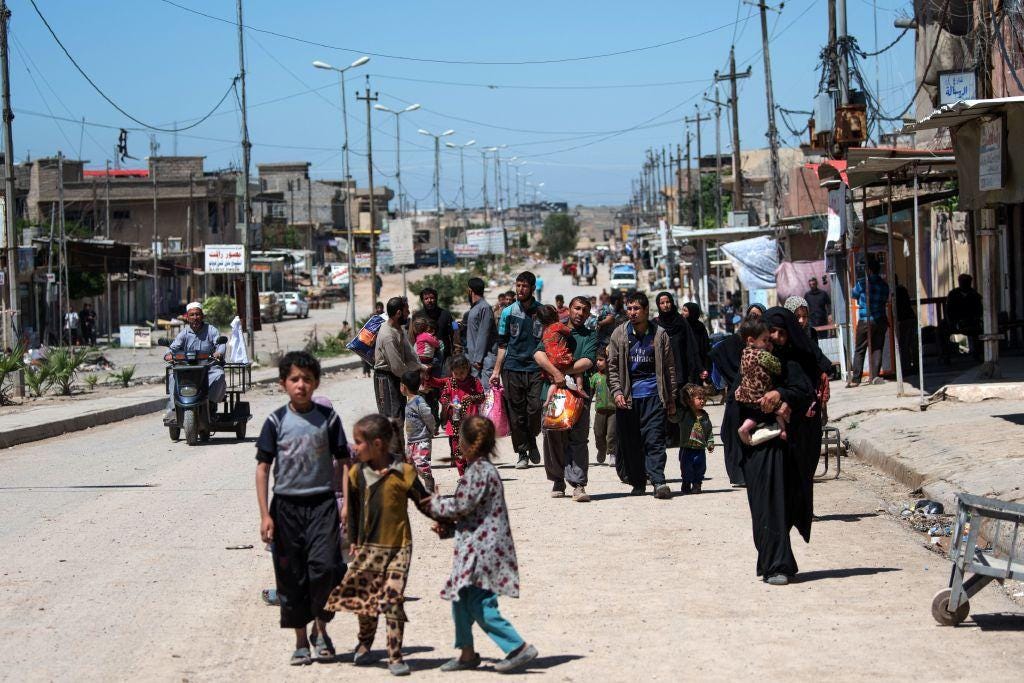 Families evacuate from front-line positions in the western part of Mosul on 24 April 2017, as Iraqi forces continue the offensive to retake the area from Isis AFP/Getty Images